By the time we arrived at the log raft, it was nearly dark.  I was squinting for a place to pull up to the outside boom when the fiberglass hull thudded three feet out of the water to announce our arrival.  The lights from the port were just enough for the five of us to scramble out of the boat and haul the case of Olympia Beer across two acres of logs to the ‘party deck’.  That was Steve’s job as he was the most athletic, and we stood by as he hopped the huge timbers both hands secure on the carton with an open eleven ounce ‘Stubby’ bottle held tightly between his teeth.

This was my third summer out of high school and classmates were dwindling away.  This warm July night it was just me, Angela, Marcy, Mike and Steve, who we called Boo for no apparent reason.  He was the only one of the gang that was over twenty-one.  The others were behind us in school, and I was an age-delayed October baby.  And so we sat on the logs in the middle of the bay away from the law and offshore from the uncertainties of the daunting real world we would sacrifice to once we grew up..

Summer memories in my hometown run deep.   I can still hear the shriek of the mill whistles announcing the graveyard shift and feel the logs that would pitch and roll every time a harbor tug set out from the docks to welcome the cargo ship that might load up and haul our temporary island sanctuary to Japan in the coming days.

I am happy to report that for all the times we walked the logs in the dark to the ‘restrooms’ at the north end of the boom, everyone returned from the shadows to pop another bottle cap until the case was empty.  Should anyone doubt this mid bay coming-of-age tale, there are multiple shards of brown glass on the mud floor of the lower harbor that lie peacefully in testament.

I still find it amusing that a whole town could be so thoroughly branded by a malt beverage as was our little capital city (1970 population of 23,111).  Most of my grade school classmates’ parents worked at either the state offices, the wood mills or the brewery.  Olympia Beer at the time was the best selling adult beverage on the west coast and enjoyed a reverence and loyalty that was never matched.  The local fire departments still have a logo that mimics the classic lettering style of the iconic label.  Olympia High students, whenever we could get away with it, would use beer advertising slogans to cheer and promote the football team.  The ‘Bears’ were the OHS mascot in name only.  The brewery tours in the summertime drew visitors from all over the world, and was the biggest tourist draw between Portland and Seattle. 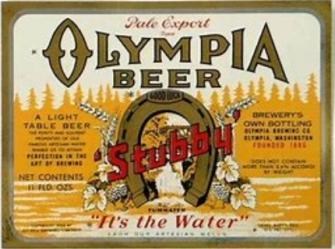 Maybe it was the exotic airborne odor of cooking beer mash that walked me to grade school on so many damp mornings, or my dad and his fishing buddies’ devotion, or my crazy Uncle Jim, the make believe Irishman, who rewarded ‘first sips’ to his preadolescent beer-fetchers up at the lake cabin, but eventually I too would become an Oly kid.  Thus it was with a great deal of hometown pride I joined the suds-sipping crowd once I got to college.   “The Drink of Moderation” and I became quite familiar.   A goodly number of ounces later, I can tell you there are malt and hops-flavored memories that stretch for many miles of my wandering history.

I have ceremoniously toasted Washington’s windy mountain tops, swirling rivers, basalt canyon walls, sunsets, lightning storms, freight train rides, backroads, and strangers-but-only-temporarily in small town taverns.  There was an old beer poster and billboard advertisement that depicted young handsome folks who worked hard, while vigorously enjoying life, nature, and freedom.  The clever hook line was my kind of arm-twisting: “You Owe Yourself an Oly.”  And so we would.

Olympia Beer, as we knew it, is no more.  The sad corpse of the once proud brewery sits empty above Tumwater Falls that powered the brewhouse in 1898.  But then, large-scale production of quality anything is lost in the past. And though aging and grownup good sense have tempered my proclivity for drink, I still have my rituals.

I can’t imagine who would want to be anyone anywhere else my twenty-first summer.  A skinny cocky college brat who got a pass on a summer job because of back surgery that somehow allowed me to play but not work.  I would hang out around town and eye the girls hanging out around town and pretended they were eyeing me back.  I remember having a secret crush on Angela while Marcy had a crush on me.  I would have been fine with Marcy, but she dyed her naturally blonde hair cinnamon red for some stupid reason which no one did ever in 1969.  But I digress.

Based on “seventy measures of livability,” Washington State has recently been declared number one in the country.  Number one “best place to live.”  Yep, I read it in The Times.  If you’re a native like me, you hold both vanity and nostalgic despair as you mourn the millions who have wandered here in my lifetime.  Because apparently the metrics of livability have changed.

I’ll make you a deal.  Kindly return my uncrowded freeways, and I’ll take back my sawmill smoke and low-cost blackboard classroom.  Ditch the waste and haste, fashion and fluff, and get back to ethical trade and the value of Enough.  Tear down the snobby nine-dollars-a-brew pubs, and set me on a raft of fresh-cut fir logs in the middle of the bay with with my high school homies, our small town big dreams, and a humble, cold, honest beer.

“I’m gone again. Finding life in all I see, trust and hope are guiding me. The road is free, and I’ll pay that cost, to find myself in getting lost.”

As the unruly seventies came to an end, a lot of the craziness practiced by our rebelling generation was becoming uncool or passé.  The revolution was aging.  Fashion, hair styles, music and culture changed almost overnight.  It seemed to me that society became less communal and spontaneous and more reserved and anxious…  1980s!  Ronald Reagan.  Cold War.  18% loan interest.  Serious stuff, children.

For me for a fact dating was noticeably different.  The young ladies of the punk decade were sassy and near impossible to charm.  For a guy that has already told you he didn’t like to work too hard, this was something of a problem.  I’m quite sure this had nothing to do with my getting older and irrelevant.  The pretty girls who used to be at least somewhat at ease in noisy smoky taverns moved on to cocktail lounges, marriage, and self-respect.  Sadder still, the smoky taverns began to move on as well.  Every few months another blue and orange neon “Oly on Tap” window sign flickered and went out.  The world was certainly making it harder to live my life like a country song.

But the wanderlust and self-dependence that I mastered in the 70’s carried me well enough into the new decade, ready or not.  I would just have to go it alone.  I had the time and resources to follow the breakaway allure of any untraveled road within a day’s drive.  I was out there.  I see now it was a part of the learning in the somewhat diverse life I now reflect upon.  My own two-lane Vision Quest.  But at the time it was just me going-gone.  And it was the greatest of adventures.

I created a mental map of the lesser known and most uncelebrated destinations around my home state.  In my mind this virtual chart looked like the work of some ancient anonymous cartographer on weathered parchment.  Rough boundaries were set purely on guesswork and hearsay, locations were misplaced and named at random.  Rather like a rendering of Middle Earth.  Sketches of sea serpents and mermaids and exotic plant life were sprinkled about in the vastness and out to the torn margins.  I savored the risk of falling off the edge of the known world with every adventure outward.  Always the journey, never the destination.

The Path of Least Insistence

Come Friday, spring through fall, the blue highways beckoned me to tease the unexpected and curious from the geography.  Those were the days that your route would be determined by a whim, not a satellite.  I remained mostly to myself.  People I encountered on the road could be helpful and informative, but I tried hard to keep the cast of my movie to a minimum and largely avoided others so as to claim ownership of all I saw and felt.  I certainly took note of towns and buildings, parks and farms, and other man-made donations to the landscape and its history, but I felt most at ease with the beautiful and simple disorder of nature.  The rushing streams, dusty forest roads, mountain trails, and the rolling fields behind the weathered farm buildings were what captured my eye and camera lens and filled me with serenity.

I began to stream fish.  Driving a tiny, cheaply-build, used Japanese sports car with a luggage rack on the trunk, I ventured out with a sleeping bag, pillow, tent and duffel.  In my pack was a 35 mm camera, rolls of slide film and my journal. The trunk held a tent and a camp stove for coffee.  A fishing pole, worms, and tackle box were on the bucket seat beside me.  ‘Dude, get a truck!’ you say.  But my speedy drop-top Datsun 1600 roadster and I would climb mountains, ford streams, race freight trains along the Columbia Gorge, camp in the outback, and park behind fleabag hotels where somehow nothing got stolen from the open two-seater with the keys under the driver’s seat..

Author Richard Brautigan wrote several offbeat collections of poetic prose which became cult classics in the 1960s and 70s.  The series of short essays in “Trout Fishing in America” paint a thoughtfully surreal picture of living deeply in life and nature.  Brautigan, unfortunately, eventually succumbed to the disability and death common to those artists who could never achieve the expectations of their deep impressionistic insights.

In the title story he depicts a trout stream in southern Idaho as a metaphor for self-discovery within the flow of nature. That somehow made sense to me — in spite of the fact I was no kinda fisherman of the Zen persuasion. I cast to kill, severed the heads, and ate the prey. In a spiritually ritualistic way of course. Catch and release with no live bait was inelegantly silly and too damn much work, and I didn’t care who knew I thought so. The lesson being it’s important to keep some grip on reality when you’re learning to take trips into untested dimensions. Lest you disappear entirely. Like Brautigan. Like great writers too often do. I only ask that I be spared until I’m ready.

The Call of the Mild

To this day I will swerve off the road on a sunny drive to spend a moment or an hour or a day by a river. It was in simple sacred spots on these shores a half a life ago that I first heard the silent whisper of what would be a ’calling to self.’

I would choose retreats like this, and still do, because it is here I seem to find prayer in the invisible order of things. Unquestioning…just letting the road or the river take me to where I need to go. In those days I was not certain where that call would lead me, but over time I came to know I was experiencing, as my beautiful and occasionally confused lifelong buddy Margo would call it: the carrot at the end of the tunnel.